Carlos Arellán (2021-05-08). Leopoldo López Condemns Protests in Colombia from Luxury Condo in Madrid: Having Duque 'is a Privilege'. orinocotribune.com Regarding the bloody repression in Colombia against peaceful demonstrators, there are several aspects that are astonishing. In addition to the vicious will of its police officers to impose order through questionable means, there is an occurrence that surpasses them: Leopoldo López's condemnation of violence—but not the violence of Colombia's repressive forces. | The Venezuelan, who is known for his marked vocation for violence, released a statement whose reading produces enormous cognitive dissonance. | These are five paragraphs of an unknown version of Leopoldo López, at least to Venezuelans. The politicia…

Editor2 (2021-05-08). Colombia an Imperial Beachhead: The War of the Colombian Oligarchy and Duque against Venezuela. orinocotribune.com

By Mison Verdad — May 4, 2021 | One year after it sought to invade Venezuela and capture President Nicolás Maduro with Operation Gideón, the Colombian government continues to participate in conspiracies planned in Washington to bring about regime change in Caracas. | Since 2018, when the attempted assassination of President Maduro and the Venezuelan military high command was thwarted with the use of explosive drones, Bogotá's willingness to serve as an operational base to plan attacks against Venezuela has been confirmed with every step it takes and laid bare before the international media and diplomatic sho…

Amidst the continued internal crisis in Colombia caused by the ongoing anti-government protests and the heavy police repression, the Colombian authorities decided to declare a Cuban diplomat as persona non grata on charges of exercising "activities not compatible" with his diplomatic post. | On Friday, May 7, the Cuban Foreign Ministry described the expulsion of its embassy's first secretary in Colombia, Omar Rafael García, as unjustified and hostile. García was declared as persona non grata by the Colombian government. | In a message published on its official website, the Cuban Ministry of Foreign Affairs (MINRE… 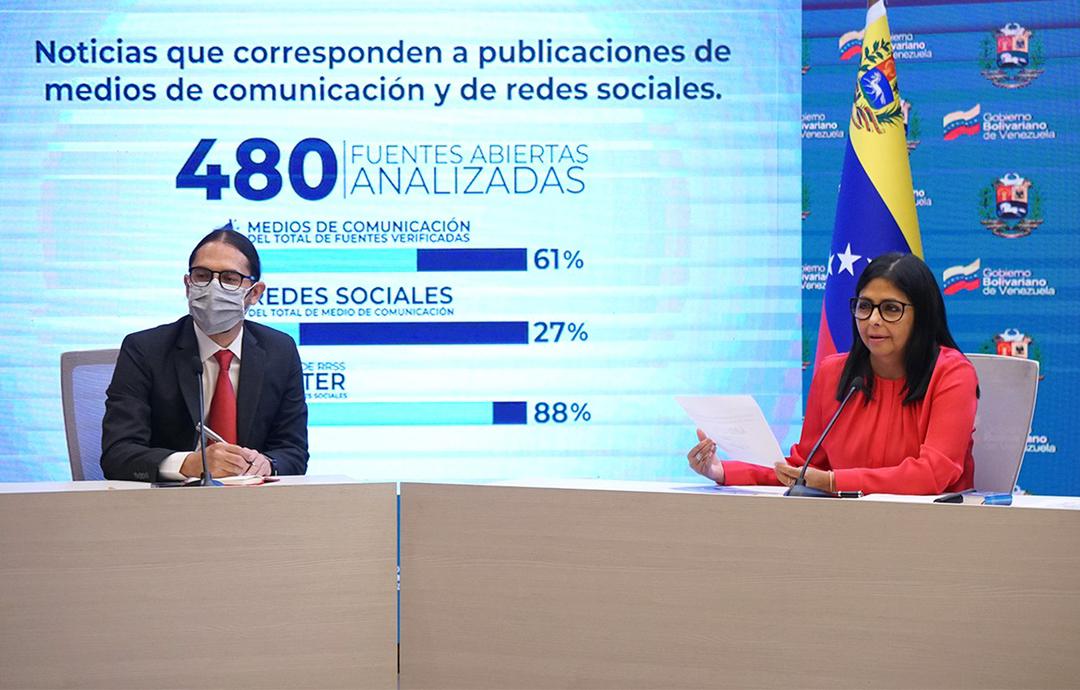 A big data investigation carried out by independent experts determined that local and international right-wing elements used social media networks to carry out a campaign of media denigration and defamation against Venezuela on the issue of human rights, with the result that the South American nation is now the subject of an investigation by the International Criminal Court (ICC). "They want to classify [them as] international crimes without them having been committed," said the Executive Vice President of Venezuela, Delcy Rodríguez, in a press conference broadcast this Friday, May 7 by state-owned Venezolana de… Brenda Norrell (2021-05-08). Divest in Israel's Elbit on Tohono O'odham Nation and in Palestine. indybay.org The 'Divest in Elbit' panel today reveals the surveillance and weapons of the Israeli defense contractor Elbit Systems, targeting Tohono O'odham and Palestinians, by way of U.S. contracts and funding, violating human rights and international law.

_____ (2021-05-08). Global Protests Target Banks Funding Line 3 Pipeline. popularresistance.org San Francisco – Today across 8 countries, 4 continents, and 50 U.S. cities, hundreds of climate and Indigenous rights activists are protesting 20 banks that have backed loans for Enbridge, the company constructing the Line 3 tar sands pipeline through Anishinaabe territory in Minnesota. The protests feature elaborate and artful displays such as a body mural in Seattle spelling "Defund Line 3," a fake oil spill in New York, a large floating banner display in Chicago, a fake oil spill and giant dance party in D.C., and a street mural in San Francisco. Activists also effectively shut down branches of the 20 target b… Screen grab from one of the fire videos. | Late on May 7, a massive fire broke out in the Iranian city of Bushehr, where a nuclear plant, an oil port and a military naval base are located. | Residents of Bushehr were quick to upload footage of the fire, which spread near the entrance of the city's main port, to social media | According to the Fars News Agency, fifteen firefighters, six trucks and a tanker were mobilized to face the massive fire, which was put down within two hours. No human losses were reported. | T…

AutumnSun (2021-05-08). 2020 CZU Fire: Empire Grade Road 5-6-2021. indybay.org Mike and I took a short ride to survey some of what remains from the CZU Lightning Complex Fires. Today we just centered around the upper part of Empire Grade Rd.

sputniknews (2021-05-08). 'Warmongering Fool' vs 'Cheeto Jesus': What's Behind Republicans' Push to Purge Liz Cheney? sputniknews.com Liz Cheney, the Wyoming congresswoman and daughter of once powerful GOP grandee and Iraq War architect Dick Cheney, is again facing expulsion from the leadership of her own party over her stance on Donald Trump — a representative of the more assertively anti-globalist, less aggressively interventionist wing of the Republican Party.

_____ (2021-05-08). Hunger Strike: Yemeni People Are Being Starved. popularresistance.org During the early days of the war, when Iman Saleh called her family in Yemen, they would lie to reassure her they were safe. "They would always say, 'Don't worry, it's happening far from us,'" Saleh said. "It felt like I was becoming a burden to them, because now they were trying to make me feel better, on top of trying to survive." | Now, when Saleh calls her family in Yemen, she simply asks how their day is going. For the past six years, the 26-year-old organizer from Detroit has struggled with survivor's guilt, watching her homeland ravaged by a war between the U.S.-backed Saudi coalition and the Houthi rebels…

Loretta Graceffo (2021-05-08). Yemeni people are being starved. zcomm.org So this Detroit organizer went on hunger strike in solidarity…

Kamal Iranidoost (2021-05-08). G7 statement on Yemen shows intl. hypocrisy: Ansarullah. en.mehrnews.com TEHRAN, May 08 (MNA) — A member of the Ansarullah movement's political council has dismissed a G7 statement that condemned Yemeni forces while ignored the crimes committed by the Saudi coalition as hypocrisy.

_____ (2021-05-08). Iran Says US Has Yet To Offer Enough Sanctions Relief. popularresistance.org The fourth round of talks aimed at reviving the Iran nuclear deal kicked off in Vienna on Friday. Iran's top negotiator said he believes the US is "serious" about returning to the agreement but that it has not yet offered adequate sanctions relief. | "The information transferred to us from the US side is that they are also serious on returning to the nuclear deal and they have so far declared their readiness to lift a great part of their sanctions," Iranian negotiator Abbas Araqchi said. | "But this is not adequate from our point of view and therefore the discussions will continue until we get to all our demands,…

Staff (2021-05-08). EU envoy calls for an immediate revival of JCPOA. en.mehrnews.com TEHRAN, May 08 (MNA) — Deputy of European Union Foreign Policy Chief says he feels a definite urgency to conclude the nuclear talks, and he is happy to see that Iran and the United States feel the same way.

Kamal Iranidoost (2021-05-08). 'Onus is on US, not Iran': FM Zarif. en.mehrnews.com TEHRAN, May 08 (MNA) — The Iranian Foreign Minister Mohammad Javad Zarif has tweeted on the anniversary of the US withdrawal from Iran nuclear deal, reminding the new US administration how the crisis over JCPOA started.

Staff (2021-05-08). Briefing on Iran's daily developments. en.mehrnews.com TEHRAN, May 08 (MNA) — The following are the Islamic Republic of Iran's latest developments in the last 24 hours.

Staff (2021-05-08). Iran, India discuss expansion of trade relations. en.mehrnews.com TEHRAN, May 08 (MNA) — During the meeting with the Indian Ambassador, Deputy of Iranian Industry Minister stressed the need to remove barriers to mutual trade and find new solutions for the development of trade relations between the two countries.

Staff (2021-05-08). 1mn doses of vaccine to arrive in Iran in coming days. en.mehrnews.com TEHRAN, May 08 (MNA) — According to Iranian President Hassan Rouhani, the country is scheduled to receive 1 million doses of the vaccine in the coming days.

Kamal Iranidoost (2021-05-08). Iran may extend cooperation on inspections with IAEA. en.mehrnews.com TEHRAN, May 08 (MNA) — The top Iranian negotiator at Vienna talks on reviving the JCPOA says that Tehran may consider extending cooperation with the International Atomic Energy Agency over inspections of its nuclear sites.

Kamal Iranidoost (2021-05-08). Non-scheduled flights to bring back Iranians from India. en.mehrnews.com TEHRAN, May 08 (MNA) — Spokesperson for Iran's Civil Aviation Organization says that there will be two flights to India and France this week to return the Iranian nationals from those Coronavirus-hit countries.

Staff (2021-05-08). Tehran, La Paz to prepare coop. program. en.mehrnews.com TEHRAN, May 08 (MNA) — The Ambassador of Iran to Bolivia and the Vice President of the country emphasized the development of a cooperation program.

Dave DeCamp (2021-05-08). Iran Says US Is 'Serious' About Reviving Nuclear Deal But Has Yet to Offer Enough Sanctions Relief. news.antiwar.com The fourth round of talks aimed at reviving the Iran nuclear deal kicked off in Vienna on Friday. "The information transferred to us from the US side is that they are also serious on returning to the nuclear deal and they have so far declared their readiness to lift a great part of their sanctions," Iranian negotiato…